The Blighted Flame by P. A. Peña 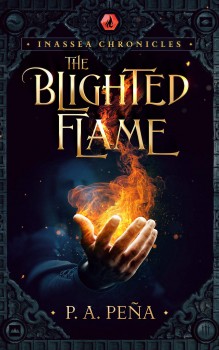 For five years, twenty-three-year-old Virgil Truesdale has hunted the witch responsible for murdering his family. Despite his efforts and burning lust for vengeance, his quest has been fruitless.

However, after a lead takes a turn towards the unexpected, Virgil receives an opportunity to get within striking distance of his goal. Unfortunately, seizing this opportunity means turning his back on his family’s lineage, and participating in the Crusader’s Exam — a hellish test designed to push him to the absolute brink.

Initially, Virgil is determined to keep to himself. But of course, he has never been one to sit idly by as others around him suffer. Before long, Virgil acquires a pair of unlikely allies harboring their own dark secret, a fearsome adversary determined to make his life miserable, and a passionate romance the likes of which he has never seen. Worse yet, just as he seems to be getting his bearings, the emergence of a new threat endangers every bit of progress he has made. In an instant, Virgil is forced to come to grips with a gruesome reality he never thought possible. Only this time, his actions won’t just determine his own fate.