The Binding Tempest by Steven Rudy 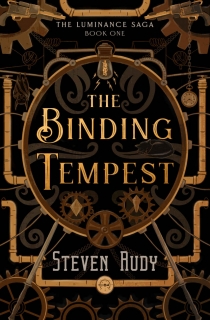 A fallen empire, a failed republic, and a frontier of alchemy, magic and machines…

…From the ashes of the defeated Sagean Empire, a new era of advancing science has emerged, but in the war-torn cities, where the glow of gas lamps burn, evil stirs in the shadows and an ancient threat stalks the energy of souls.

Forty years after the Great War, Ellaria, a former war hero, has discovered the Coalition of Nations she helped build, has fallen under the control of a new Sagean Dark Lord. A luminary with the power to control energy, that has finally emerged to reclaim the vacated throne. With no one left to trust, Ellaria sends for help from old allies scattered across the chaotic frontier.

Now three aging veterans and a band of young rogues, are all that can protect the failing republic from the return of an evil empire. Together, their only hope lies buried with the mysteries of the past and an ancient relic called the Tempest Stone….