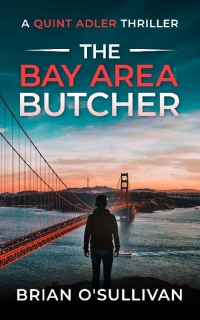 A sadistic serial killer brings Quint along for the ride…
After almost losing his life at sea, Quint Adler has been enjoying the downtime with his beautiful girlfriend, Cara. But the carefree days come to a crashing halt.

Bay Area police receive a letter. A man claims he’s about to start a killing spree that will go down in history. And he mentions Quint by name, drawing him into the case.
The killings begin and comparisons to The Zodiac abound, but it’s clear The Bay Area Butcher will surpass him in both victims and notoriety.

He continues sending letters, mocking the police, needling Quint, even giving the date that each set of murders will be carried out. It becomes an international story with The Butcher’s fascination with Quint at the forefront.