The Bars That Hold Me by Ed Grace 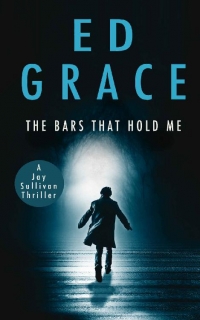 He has days to stop an imminent terrorist attack that only he knows about – but how is he supposed to stop the attack from a prison cell?
After witnessing a terrorist attack that claims the lives of hundreds, ex-assassin Jay Sullivan turns to what he does best – drinking.
Little does he realise that this is only the first of three major attacks planned in the next thirty days – each one intended to be more devastating than the last.

So when he is asked to help prevent more deaths, he doesn’t even consider saying no.
The only catch? He has to get arrested and sent to prison in order to spy on the terrorist group’s leader.
But when his handlers become incapacitated and there is no one else who knows the real reason why he is behind bars, he soon realises he is on his own. Only he knows when the next attack will be, and where it is taking place.

When ensues is a race against time where Sullivan must escape prison and stop the attack before it’s too late.
Can he get there in time to rescue all those people who would rather he wasn’t part of their world? Or will he fail and have to watch thousands more innocent people die?