The Banner of the Broken Orc by Aiden L. Turner 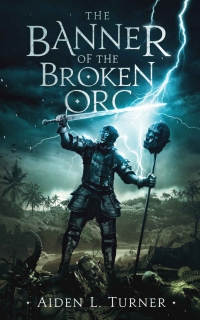 The world of the Elves is failing. No longer are they creatures of grace and connected with the energies of life. Cut off. Isolated. Vengeful. Cameos, chieftain, steps forward to be his people’s strength, yet he is plagued with doubt. There is darkness amongst his kind, hidden, yet bending the weak-willed to servitude. King Kane the Cruel, first of his name, has undoubtedly earned his reputation. His cold heart, warmed only by his lust for suffering, now serves the one who calls his name in the deep of night. His dreams go far beyond his sadistic cravings and sexual barbarity. He dreams of wealth. He dreams of glory.

He dreams of the darkness. Gymir, Death Dancer in the old tongue, stands before a horde of the enemy. The battlefield before him is littered with the butchered remains of Goblin. His great sword has sung a song of slaughter, and his armour plate is scarred and stained with his enemies’ blood. From out of the jungles steps a greater Orc of monstrous size, a double-bladed battle axe in its hands. Its nakedness uncovered. Its savagery evident. It swings its foot-long tusks back and forth as it roars an incoherent challenge. Gymir, Knight-captain of the brotherhood of the Order of Light, smiles, for there is joy in battle. There is no fear in his heart as he runs to give battle with the servants of the Dark Lord.