The Back to Front Murder by Tim Major 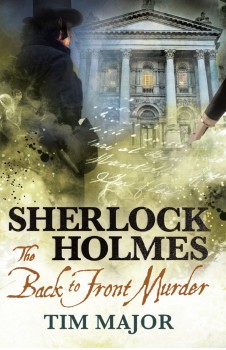 Sherlock Holmes assists a popular mystery writer whose plots seem to be coming to life.

May 1898: Sherlock Holmes investigates a murder stolen from a writer’s research.
Abigail Moone presents an unusual problem at Baker Street. She is a writer of mystery stories under a male pseudonym, and gets her ideas following real people and imagining how she might kill them and get away with it. It’s made her very successful, until her latest “victim” dies, apparently of the poison method she meticulously planned in her notebook.

Abigail insists she is not responsible, and that someone is trying to frame her for his death. With the evidence stacking up against her, she begs Holmes to prove her innocence…