The Arena by R.B. Ellis 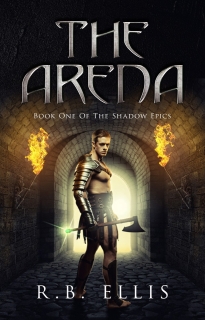 Gladiator meets Game of Thrones. Great for fans of Abercrombie’s First Law trilogy and Stover’s Acts of Caine series. In the suffering city of Yddinas, hemmed in by sea, mountains, and enchantments, champion and contracted combatant of the arena, Cael Brenion, kills to provide for his little brother.

His avarice, rapid rise, and the peculiar stone in his weapon’s pommel gain the attention of Valeina, the chancelloress and most powerful woman in the city, which consequently attracts the eye of sadistic Chancellor Orik.

Cael discovers physical prowess means nothing in the psychological games of throne and politics, where he and his brother are nothing but pawns on a board.Meanwhile, Agenayus, high priest and a disguised member of another race, struggles to keep the city’s ambitions within the borders of the mystical barrier that secretly protects the human race from the harmful magic beyond.Ambitions clash, and the fate of a city and civilization will be decided by the outcome.