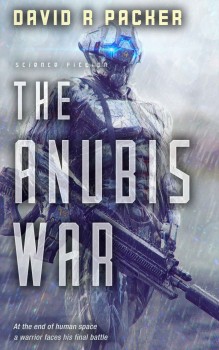 At the end of human space, a warrior faces his final battle

Vasco Alcazar al Madina del Goya had served the empire for most of his life, and retired to live a peaceful life as a fencing instructor. But a life spent in Long Drops, multi-year FTL conquest missions, has left him restless and bored, so it doesn’t take much convincing for an old friend to talk him into signing up again for one more mission.

The Sami people of the planet Rumi are one of the last of the far-flung human planets to not be integrated into the Polity, the New Ottoman Empire. Now it was their turn to be folded back into humanities arms. Rumi is also the only gateway to the isolated Laconians, the sole suppliers of the super-computers that drive the empire. And also the final border to the enigmatic alien race of the Pook, who once destroyed most of the galaxy in a relativistic war.

All Vasco wants is one last chance to prove himself to be the warrior he always knew he could be, one last shot at glory…the Anubis War awaits.