The Anniversary by Sarah K. Stephens 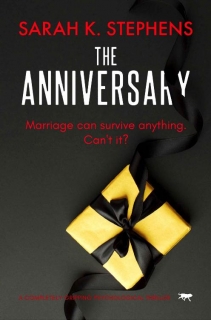 Until death do they part…
Mary and Jackson are spending their one-year wedding anniversary in a remote luxury cabin. They married after a whirlwind romance, and soon after the wedding, Jackson left for a nine-month work placement halfway across the globe.

Now that Jackson’s back, Mary is determined to make her marriage a success. The trip has a promising start, but things begin to unravel when Mary reveals to Jackson the truth about her past and the secret that drove her family apart.

When a hike results in Mary almost falling to her death, suspicions she has about her new husband rise to the surface. Surrounded by forest for miles, and without reliable phone reception, Mary realizes she is totally isolated with a man she barely knows.

The days of their delayed honeymoon tick by and Jackson’s devotion transforms before Mary’s eyes into something more sinister. As her own mental state deteriorates under the pressure, Mary is left with only one question:
Can she save herself before her husband loves her to death?