The Amsterdam Deception by Tony Ollivier 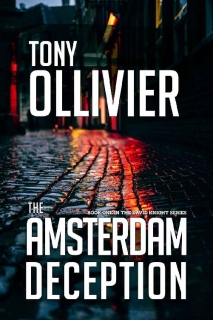 A NIGHT ON THE TOWN IN AMSTERDAM TURNS INTO A DEADLY GAME OF DECEPTION
On his first international tour with the National Ballet of Canada, dancer David Knight is abducted from Amsterdam’s Red Light district and dragged to a clinic owned by Richard Reynolds, a billionaire with a serious problem. A prototype for a device that could save Reynolds’ company has gone missing and the only one who knew its whereabouts, a Cold War spy, is dead.

To find the missing device, Reynolds forces David to undergo a procedure to “host” the last thirty seconds of the spy’s memories. The procedure goes awry, however, and the spy’s memories, skills, and abilities download into David and break him free from Reynolds’ clinic. Dazed and disoriented, David stumbles out into the Amsterdam night and into a world he has only ever encountered in spy novels.

As the hunt begins, Reynolds needs David alive, but a rich televangelist wants him dead. Another man’s memories become David’s only protection in a battle between religious greed and corporate profits.