The Alien Accord by Betsey Kulakowski 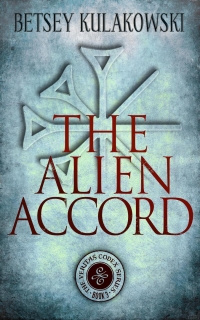 Strange signals from outer space. Unexplained phenomena across the globe. Are we alone in the universe? Are we sure we want to know?

Television investigator Lauren Grayson and her husband Rowan are shooting a new show for The Escape Channel. But the assassination of a Russian cosmonaut—just as he declares that aliens exist—and her estranged brother’s discovery of bizarre space signals, interrupt their plans.

Lauren races to find the truth and to stay ahead of world governments trying to stifle her investigation. Her efforts convince her that aliens not only exist but have drawn Earth into a cosmic confrontation. Every new discovery tells Lauren there is more to this than she comprehends. All she knows for certain is that the danger is real—and threatens everyone she loves.