The Accused by Owen Mullen 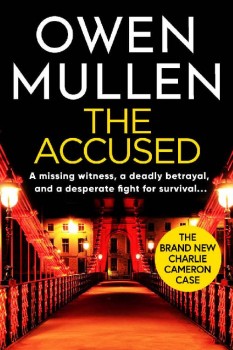 When Private Investigator Charlie Cameron agrees to take on a cold case, he is drawn back into Glasgow’s dark underworld…
Glasgow PI Charlie Cameron knows Kim Rafferty is bad news the moment they meet. Desperate people always spell trouble in his experience, and Mrs Rafferty is as desperate as they come. What she is asking for is insane and if he agrees to help the wife of the notorious East-End gangster, the consequences for them both could be fatal.

Twenty-four hours later, another betrayed woman with a hopeless case is pleading for Charlie’s help. The PI is her only chance to keep an innocent man from serving a prison sentence for murders he didn’t commit.
Dennis Boyd is on the run, and as Charlie fights against the clock to keep him out of jail, he crosses a line that puts him on the wrong side of the law and pits him against his old friend and ally, DS Andrew Geddes.
As the body count grows, and the defence for his client falls apart bit by bit, Charlie refuses to accept the inevitable. But everyone has their limits – even the infamous Charlie Cameron. Will he be forced to admit that this case may be the one to beat him…