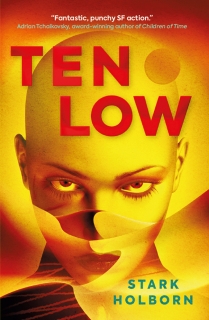 Ten Low is an ex-army medic, one of many convicts eking out a living at the universe’s edge. She’s desperate to escape her memories of the interstellar war, and the crimes she committed, but trouble seems to follow wherever she goes. One night, attempting to atone for her sins, she pulls a teenage girl – the sole survivor – from the wreck of a spaceship. But Gabriella Ortiz is no ordinary girl. The result of a military genetics programme, she is a decorated Army General, from the opposing side of the war to Ten. Worse, Ten realises the crash was an assassination attempt, and that someone wants the Ortiz dead…

The pair bury their hatreds and strike an uneasy deal to smuggle the General off-world. Their road won’t be easy: they must cross the moon’s lawless wastes, facing military hit squads, bandits and the one-eyed leader of an all-female road gang, in a frantic race to get the General to safety. But something else waits in the darkness at the universe’s edge. Something that threatens to reveal Ten’s worst nightmare: the truth of who she really is and what she is running from.