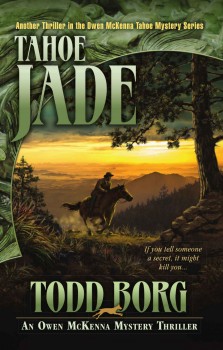 A Letter From Abe Lincoln
In the fall of 1861, President Abraham Lincoln wrote a letter to the new governor of California, Leland Stanford. Lincoln sent the letter by Pony Express, which went through Tahoe. The letter from Lincoln was intercepted, and it never reached Stanford.

An Assault, A Fire, A Kidnapping
160 years later, Firefighter Jade Jaso was assaulted in Sacramento. The next day she nearly died in a warehouse fire. A short time later, her rancher father was killed in a fall at Lake Tahoe. Then Jade disappeared.

A Coded Message
When Detective Owen McKenna is brought on the case, he finds Lincoln’s letter hidden in the personal effects of Jade Jaso’s father, who was a collector of historical memorabilia. The letter contains a coded message. McKenna learns that the message refers to a treasure Stanford had mentioned to Lincoln. Unfortunately, Jade’s father made the deadly mistake of talking about the letter. The information came to a brute of a man who would kill and torture anyone who got in the way of finding that treasure, including Jade and her father, as well as Owen McKenna and McKenna’s girlfriend Street Casey…