Sunshield by Emily B. Martin 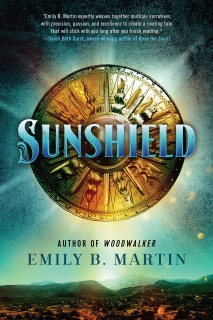 A lawless wilderness. A polished court. A collision of fates on a quest to expose a system of corruption.
The desolate canyons of Alcoro-and the people desperate enough to hide there-couldn’t be more different from the opulent glass palace and lush forests of Moquoia. But the harsh desert and gleaming court are linked through their past, present, and future: a history of abductions in the desert to power Moquoia’s quarries and factories, and a bleak, inhumane future built on the sweat and sacrifice of these bond laborers.
But events unfolding in the present could change everything. In the desert, outlaw Lark-known to most as the Sunshield Bandit-has built a name for herself attacking slavers’ wagons and freeing the captives inside. But while she shakes the foundation of Moquoia’s stratified society, she also has to fight to protect her rescuees-and herself-from the unforgiving world around them.

In the Moquoian court, young ambassador Veran hopes to finally make his mark by dismantling the unjust labor system, if he can navigate the strict hierarchy and inexplicable hostility of the prince.

And caught in the middle of it all, Tamsin is trapped within four walls, the epicenter of a secret political coup to overthrow the Moquoian monarchy and perpetuate the age-old system of injustice.
Separated by seas of trees and sand, the outlaw, the diplomat, and the prisoner are more connected than anyone realizes. Their personal fates might just tip the balance of power in the Eastern World-if that very power doesn’t destroy them first.