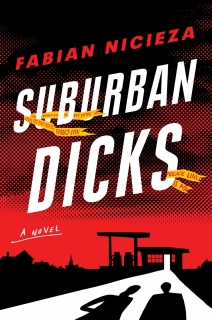 An engrossing and entertaining murder mystery full of skewering social commentary, Suburban Dicks examines the racial tensions exposed in a New Jersey suburb after the murder of a gas station attendant.

Andie Stern thought she’d solved her final homicide. Once a budding FBI profiler, she gave up her career to raise her four (soon to be five) children in West Windsor, New Jersey. But one day, between soccer games, recitals, and trips to the local pool, a very-pregnant Andie pulls into a gas station—and stumbles across a murder scene. An attendant has been killed, and the bumbling local cops are in way over their heads. Suddenly, Andie is obsessed with the case, and back on the trail of a killer, this time with kids in tow.

She soon crosses paths with disgraced local journalist Kenneth Lee, who also has everything to prove in solving the case. A string of unusual occurrences—and eventually, body parts—surface around town, and Andie and Kenneth uncover simmering racial tensions and a decades-old conspiracy.