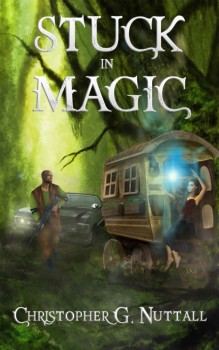 Elliot Richardson thought he’d lost everything.
He’d come home from deployment to find his wife cheating on him, his sons strangers and his life in tatters. Driving away, unsure where he was going, he fell through an interdimensional rift and found himself in a very different world, a city of magic and mystery and dangers beyond his comprehension, a land spinning out of control as innovations from the distant west unsettle the monarchy and challenge the position of the aristocrats and warlords that hold the kingdom in their grasp.

Powerless and alone, with no way home, Elliot struggles to survive long enough to make a new life. But as war looms on the horizon, he finds himself forced to use his skills to make a name for himself, all too aware that the slightest slip will mean instant death – or worse.