Stranger at the Door by Gil Meynier 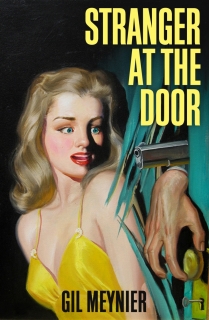 Stranger at the Door, first published in 1948, is a noir thriller centered on a young drifter who arrives in Tucson looking for work. The man, Joe, gets involved with a small-time underground ring of criminals and with a young girl with secrets in her past. Joe goes on to defraud, terrorize, and kill the people in his immediate sphere, sometimes for a little money, more often as revenge for imagined insults and to bolster his own ego.

The Tucson weather at its worst plays a large part in setting the atmosphere of despair and horror. Joe’s feelings of being persecuted grow as he antagonizes everyone he knows.

His only consolation is in telling himself how smart he is as he figures the angle for his next misadventure. However, caught in a desert storm, a flash flood puts a permanent end to his schemes, one angle he never saw coming.