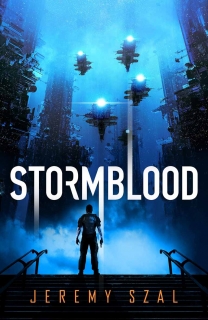 Vakov Fukasawa used to be a Reaper, a biosoldier fighting for the intergalactic governing body of Harmony against a brutal invading empire. Now, he fights against the stormtech: the DNA of an extinct alien race Harmony injected into him, altering his body chemistry and making him permanently addicted to adrenaline and aggression. It made him the perfect soldier, but it also opened a new drug market that has millions hopelessly addicted to their own body chemistry.

But when Harmony tells him that his former ally Reapers are being murdered, Vakov is appalled to discover his estranged brother is likely involved in the killings. They haven’t spoken in years, but Vakov can’t let his brother down, and investigates. But the deeper he goes, the more addicted to stormtech he becomes, and Vakov discovers that the war might not be over after all. It’ll take everything he has to unearth this terrible secret, although doing so might mean betraying his brother. If his own body doesn’t betray him first.

A vibrant and talented new voice in SFF: alien technology, addictive upgrades, a soldier determined to protect his family, and a thief who is prepared to burn the world down . . .