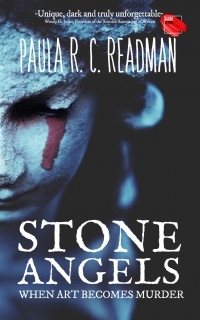 Is fame the perfect cover for murder?

Artist, James Ravencroft, thinks so. As his reputation as a painter grows, so does his need to find the next perfect model. They don’t just pose for him, they become his still life – his Stone Angels.

Haunted by his dead mother’s notoriety, James goes in search of an agent to give him what he wants: international prominence. But then, James discovers that his agent, Basil Hallward, has his own agenda. Now James must turn the tables and destroy the one person who can give him the publicity he seeks for his Stone Angels paintings.
Finally after ten years, he achieves his ambition to have a solo art exhibition for nine of his paintings, but the police are closing in on him. James has one last chance to complete the tenth painting, but has he left it too late?