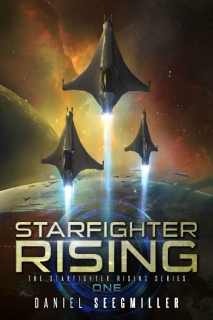 The enemy wanted him. The galaxy needed him.
Sixty years ago the Nolvarics nearly conquered Earth. They were defeated by starfighters.
Konran dreamed of becoming a starfighter, but he blew his one shot five years ago. Now his life is stuck in neutral as a glorified rock hauler.

He didn’t expect to find Nolvarics lurking in deep space. They didn’t expect him to survive the confrontation.
Now all eyes are on Konran as he is plunged into a whirlwind of space battles, peril, and conspiracy. The Nolvarics will stop at nothing to catch him, dead or alive.
Destiny hangs in the balance. Can Konran rise and claim it?