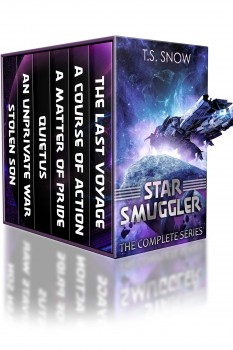 Get the Star Smugger Box Set, featuring all six books in the Amazon Bestselling series. Star Wars meets Firefly in 2000+ pages of exciting space opera thrills that don’t let up. He’s a criminal. She’s far from it. Together, they’re Earth’s last hope… they just don’t know it yet. Sinbad sh’en Singh had everything. A thriving smuggling career, his hologram on wanted posters on eleven planets, and plenty of women. Then she walked into his life. Andrea Talltrees, member of a backwards cult not believing in space travel or anything else invented after the Twentieth Century. She wants him to find her husband, a fugitive accused of being an Albegensian spy, the planet currently at war with Earth. He doesn’t want anything to do with an Earther, but a massive culture clash and a heavy dose of instant attraction get in the way, sending good sense flying out the viewport. They’ll brave some very unsavory characters, maybe even prevent a second interplanetary war…if they can stop arguing.