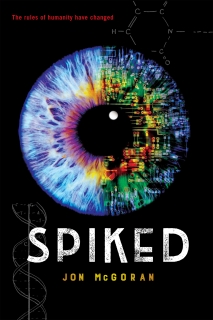 A plan for peace turns into a fight for survival in the third book of the acclaimed sci-fi thriller series.

Committed to both peace and human rights for chimeras-people who alter themselves with animal DNA-seventeen-year-old Jimi Corcoran is torn when she’s invited to a gathering of moderate pro- and anti-chimera rights activists seeking to find common ground. But when a militant chimera rights group prevents her from attending-and saves her from being killed by the bomb they’ve planted-Jimi herself falls under suspicion for the blast.

Seeking to clear her name, Jimi and her chimera boyfriend, Rex, investigate the mysterious group. . . . only to discover that her involvement is no accident. As they dig deeper, they’re drawn into a whirlwind of secret identities, shocking experiments, and an apocalyptic plot that threatens the future of humanity.
In this thrilling conclusion to Jon McGoran’s timely and heavy-hitting Spliced series, extremists on both sides square off in an escalating battle between competing visions of the future of humanity, and of the Earth. Set in a near-future society where science is both celebrated and vilified, the Spliced series tackles weighty questions about genetic manipulation, artificial intelligence, population control-and when, if ever, revolution is worth a life.