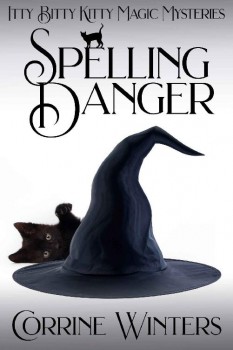 Witch-scuba instructor Netta Carlisle has lived all of her 25 years on a lush tropical island just off the coast of Florida. With its white sand beaches, thriving coral reefs, and sunken shipwrecks, Siren Key offers locals and tourists alike a chance to live their best beach life.
Best buddy Justine and magical familiar Sargasso, a rambunctious black kitten with a rapier wit, help Netta manage her lovely B&B, The Octopus Inn, as well as her scuba and snorkeling shack on the pristine shores of Sugar Cove. Cranky elder witch Maven Spice offers unsolicited advice, and a town full of hilarious misfits keeps things lively.
Until the codger finds a corpse near her cabana.
Then our heroine’s old flame Danny Sussex, new to the island police, asks her to help with the case since no one knows Siren Key like Netta.
It’s a lot.

Despite the drama, the investigators suss out a handful of strong suspects, including a threatening thug, a rabid reporter, an exasperated ex, and a maddened maid.
Then the case takes a creepy turn.
Ghost lights surface in Sugar Cove and scrawled messages scar the sand. And when Netta uses her ability to peer into the recent past, the pictures in her head just don’t add up.
Something stinks on Siren Key and she’s going to find out what, if Danny doesn’t distract her with a new declaration of love.
Can Netta solve the case, hold onto her heart, and preserve her tropical paradise?