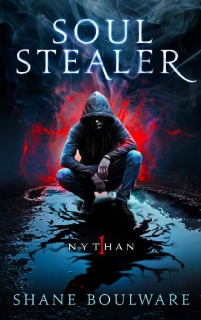 Some say it’s dead. Most believe it’s a myth. But for one young man, it just became a nightmare.
Nythan Dwienz has goals–finish college, start a career, and begin his life–but a demon in need of a host has other plans. Now, Nythan finds himself caught in a battle between this unwanted passenger, bent on using him to devour human souls, and the organization aiming to destroy it. To refuse this parasite means certain death, but to submit may be even worse.

His journey will take him from danger into darkness and force him to reconsider everything he thought he knew about right and wrong. The souls of all the living are at stake, and saving them might cost him his own.