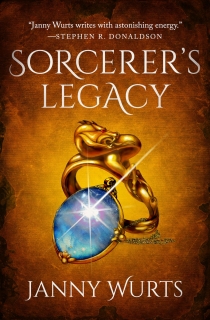 With her husband, the Duke of Trathmere, slain in battle, Elienne becomes a captive of the loathsome Prime Inquisitor of the conquering army. Her home is now a prize of war, and Elienne swept aside in the wreckage as chattel-until the Inquisitor vows to bed her as punishment for her defiance.

Locked in a dank cell awaiting her fate, Elienne is visited by a sorcerer, powerful beyond her imagining. Ielond seeks a bride for his prince, a man condemned to death by a council that has deemed him unfit for succession since he cannot father an heir. When Ielond tells Elienne she is carrying her husband’s child, the recent conception offers hope to salvage the throne. To escape the Inquisitor’s cruelty, Elienne agrees to pose her son as the royal heir. But in a battle to thwart black magic and intrigue, her bold heart will remain her own, self-reliant invention her solitary salvation as malevolent factions coalesce against her . .