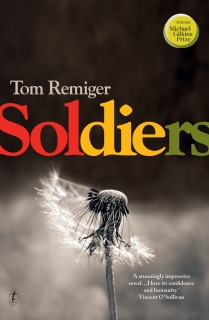 Someone was pulling at the flagpole, making the flag shiver and dance, warning the rest of the platoon to keep their heads down. Breen could see blood on the trousers of Tiger’s battledress.

After Corporal Daniel Cousins dies during routine training in England, a young officer, Lieutenant Patrick Breen, becomes obsessed. Was it an accident, or was Cousins murdered by one of his own?

Breen’s investigation, as well as his unanticipated love affair with a superior officer, threatens the unity of his comrades in the New Zealand Division as they wait for the suffering to come in the Battle for Crete—one of the defining conflicts of the Second World War.

Soldiers is about what happens to men who go to war: about the psychological as well as the physical toll. Tom Remiger’s compelling first novel tells a story of intense feeling and unforeseen experience in a strange and distant world.

Tom Remiger is the name under which Tom McLean writes fiction. He is originally from Rotorua, New Zealand, but now lives in the UK, where he is completing a DPhil in literature at Oxford. His non-fiction and academic writing have been published in a number of journals and magazines. Soldiers won the 2019 Michael Gifkins Prize.