Smoke and Memories by D.K. Holmberg 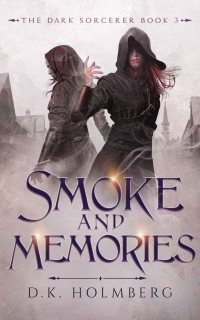 Dark sorcery, powerful enchantments, and lost secrets are key to Jayna stopping a deadly attack.
Having stopped two dark sorcerers and changing the power of her Toral ring with the dangerous bloodstone, Jayna has become a target. A dark power is coming for the city of Nelar, and Ceran has tasked her with remaining vigilant.

What comes is something Jayna is completely unprepared to face.
Attacks have pitted the Sorcerers’ Society against the ruling dular, but there’s an even greater danger—someone with magic like Eva.
Jayna has to stop a war, but how can she when she doesn’t know who’s involved?