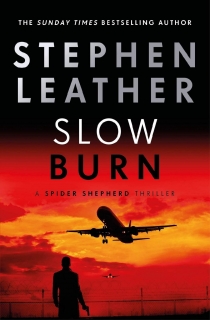 Should we bring them back?
There are thousands of jihadi brides in refugee camps in the Middle East.
Some of them were once British before they were stripped of their citizenship.
Were they brainwashed or simply naive when they set out for Syria as teenagers?
And, if they were allowed to return, would they pose a threat to our country?
Spider Shepherd is about to be sent on an extraordinary mission to the Syrian border by his MI5 boss.
There he will have to decide which of the women he meets is still a threat, and if not, which of them has information useful to the Secret Service and can be allowed back.
His are life or death decisions.

But there is one bride he must take back to the UK whatever her circumstances.
She is the wife of a notorious ISIS bombmaker, Salam Jaraf. Jaraf is an asylum seeker who has information on terrorist cells in Britain.
But the bombmaker will only tell MI5 what he knows if his wife and son are brought to him.
However, it soon becomes obvious that hostile forces are following Spider and Mrs Jaraf across Turkey.
Bringing this woman back from the warzone will become one of the most dangerous missions Spider has ever undertaken.