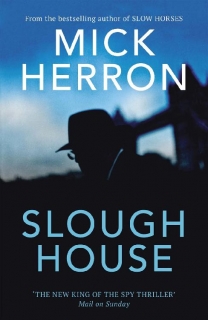 In his best and most ambitious novel yet, Mick Herron, ‘the le Carré of the future’ (BBC), offers an unsparing look at the corrupt web of media, global finance, spycraft, and politics that power our modern world.

‘Kill us?
They’ve never needed to kill us,’ said Lamb.
‘I mean, look at us.
What would be the point?’

A year after a calamitous blunder by the Russian secret service left a British citizen dead from novichok poisoning, Diana Taverner is on the warpath.
What seems a gutless response from the government has pushed the Service’s First Desk into mounting her own counter-offensive – but she’s had to make a deal with the devil first. And given that the devil in question is arch-manipulator Peter Judd, she could be about to lose control of everything she’s fought for.

Meanwhile, still reeling from recent losses, the slow horses are worried they’ve been pushed further into the cold. Slough House has been wiped from Service records, and fatal accidents keep happening.
No wonder Jackson Lamb’s crew are feeling paranoid.
But have they actually been targeted?

With a new populist movement taking a grip on London’s streets, and the old order ensuring that everything’s for sale to the highest bidder, the world’s an uncomfortable place for those deemed surplus to requirements.
The wise move would be to find a safe place and wait for the troubles to pass.

But the slow horses aren’t famed for making wise decisions.