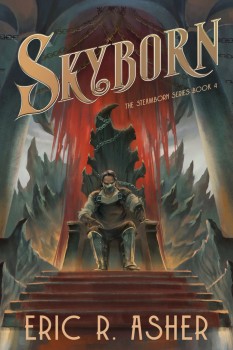 A king denied. A princess restored. A victory undone.

Ancora’s survival came at a great cost, and the reconstruction is an endless task for those who remain. Jacob and Alice explore what’s left of the Lowlands, discovering the lost journals of Charles von Atlier in the rubble. Between those leatherbound covers, Jacob finds a secret that could help him rebuild Ancora, but first it will lead him back to the desert city of Midstream.

Joining Mary on the Skysworn, Alice travels to Belldorn. There she encounters an unexpected ally, and threads of a rumor that carry her across the Crystal Sea. Pirates and rebels are just the beginning of her troubles as the King of Fel proves he has no intention of allowing the defeat in Dauschen and Ancora to go unanswered.

Conflict spreads into the desert as dark forces threaten to crush all that remains of the lives Jacob and Alice once knew. To protect their people, allies new and old must stand together, or a long forgotten enemy will swallow them all.