Sinners and Saints by Jennifer Roberson 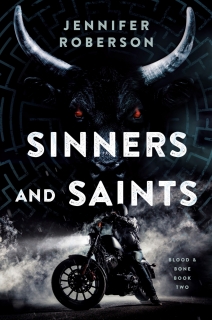 A biker and a cowboy must fight the coming apocalypse in the second book of the Blood and Bone contemporary western fantasy series.

It’s the End of Days, and Gabe and Remi–an ex-con biker and a Texas cowboy–have been conscripted to join the heavenly host in a battle against Lucifer’s spec ops troops: demons who inhabit characters from fiction, history, myths, legends, and folklore.

But Gabe and Remi, still learning their roles, now must deal with one particular demon wearing the body of an infamous murderer: Jack the Ripper. Young women bearing the names of the murder victims killed during the Ripper’s time are turning up dead, setting Gabe and Remi on a perilous path to save whoever they can, while also battling members of Lucifer’s vanguard bent on killing them.

Sinners and Saints is myth and magic, gods and goddesses, angels and agendas.