Singing To The Dead by Caro Ramsay 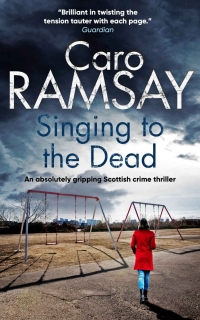 Seven-year-old Troy McEwan is only wearing leggings and a thin fleece. It’s down to minus three at night and the snow is falling. His mum doesn’t know where he is.

Then little Luca Scott goes missing as well. Both boys endured years of neglect and abuse, but now it seems they might have fallen into something even more dangerous.

Anderson and Costello contemplate the very worst — has someone taken these boys? It’s the week before Christmas and the squad has been decimated by the flu. With a nit-picking new boss and the media more interested in the return of a local pop star, it’s going to take everything Detectives Anderson and Costello have to find these missing kids.