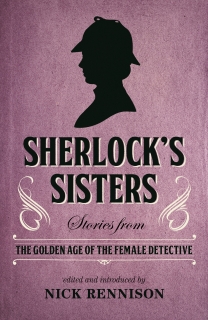 Sherlock Holmes was the most famous detective to stride through the pages of late Victorian and Edwardian fiction, but he was not the only one. He had plenty of rivals. Some of the most memorable of these were women: they were “Sherlock’s Sisters.”

This exciting, unusual anthology gathers together 15 stories written by women or featuring female detectives. His latest anthology turns the spotlight on the women detectives who could more than match their male counterparts.