Shadow of a Doubt by Michelle Davies 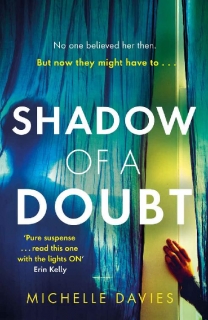 Twenty-five years ago my brother was murdered in my family home.

I was sent to a psychiatric unit for killing him.
The truth is, I didn’t do it.

The whole world believed nine-year-old Cara killed her younger brother on that fateful night. But she blamed it on a paranormal entity she swears was haunting her house.

No one believed her and after two years of treatment in a psychiatric unit for delusional disorder, Cara was shunned by her remaining family and put into foster care.
Now she’s being forced to return to the family home for the first time since her brother’s death, but what if she’s about to re-discover the evil that was lurking inside its walls?