Secrets and Lies by M.K. Farrar 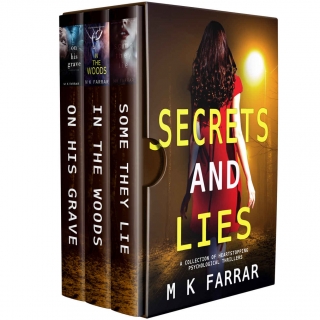 Some They Lie
Everybody hides the monster inside…
When Olivia Midhurst meets Michael, she doesn’t fool herself that he’s the perfect guy. No one is perfect—she knows that better than most. Everyone has their secrets.
But something about Michael’s behaviour sets her nerves on edge, and, when people around her start to go missing, and then turn up dead, she’s forced to act.
Knowing the police will never believe what she’s witnessed, and terrified her accusations will only drag up the past she’s worked so hard to bury, Olivia has no choice but to take things into her own hands…

In The Woods
Death is easy. Surviving… can be murder.
Twenty-three year old Cassandra Draper is the latest victim of the serial killer police have dubbed ‘The Magician’, due to his ability to make women disappear.
Abducted and drugged, he takes her out into the middle of nowhere, where he chains her to a tree trunk.
She thinks things can’t get any worse, but a freak accident renders her completely alone.
And no one knows where she is.
She thought being abducted by a serial killer was as bad as things could get….
But she’s about to learn there are worse things than being dead.

On His Grave
It started with a lie…
Life for single mother Kristen Scott has never been easy.
Brought up by a crazy mother and left to take care of her younger sister, all she ever wanted was a normal family home.
But a messy divorce leads to her struggling to make ends meet. When her co-worker suggests taking in a foreign student, the money seems too good to turn down. What she isn’t expecting is a twenty-something Swede to turn up, and slot right into her and her son’s life.
Things quickly start to go wrong. Her ex-husband isn’t happy with the new setup. Her sister has issues. Her son is being bullied…
And strange things are happening at home.
With unanswered questions, Kristen starts to wonder about the people she’s let into her life…
Someone is lying, but who?