Searching For Truth by Barry Finlay 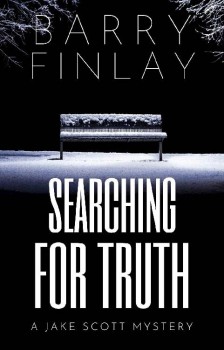 The truth could be deadly for him and people he cares about. Can this former reporter resist an enticing story despite the consequences?
Former journalist Jake Scott relies on his weekly breakfast gatherings with friends and a temperamental tabby cat named Oliver to keep his spirits up. He has lost his wife, retired from his job and watched his daughter move to Toronto with her boyfriend.
Things change when one of the breakfast attendees, a beautiful and tenacious police detective with a troubled teenage daughter, suggests Jake should write a book. When he takes her advice and researches a convicted murderer’s case, he finds out something is terribly wrong. Could a member of the breakfast group be hiding a secret deadly enough to commit murder?