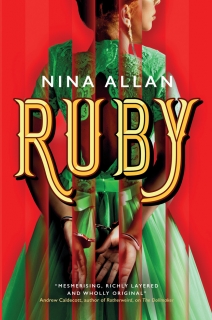 Ruby tells the story of Ruby Castle told in snapshots and fleeting glimpses and secret histories, in tales repeated and reinvented by those who fall under the horror film actress’s spell: her childhood sweetheart, an antiquarian bookseller with a passion for magical artifacts, the mistress of the poet who was once Castle’s lover, a young girl in a future Russia who dreams of the stars. Worlds collide, and the boundaries between the real and the fantastic begin to break down.

Is Ruby Castle a living person or a collective fantasy? By the end, the world that Castle created through her films has become dangerously indistinguishable from our own.