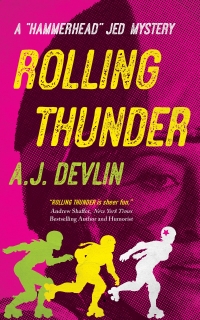 As his search intensifies, Jed is drawn into the criminal orbit of a shady entrepreneur who doubles as a late-night TV personality, a high-class bookmaker with a yen for racing dachshunds, and a kinky painter with a special technique for producing art. When the thunder rolls, Jed finds he needs more than a few of his beloved banana milkshakes to solve this case.