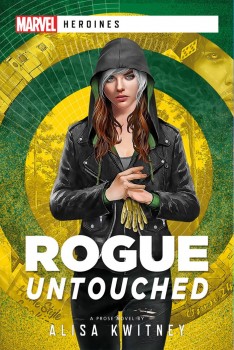 Rogue’s frightening new mutant powers keep her at arms-length from the world, but two strangers offer a chance to change her life forever, in this exhilarating Marvel Super Hero adventure

Young Rogue’s life sucks: she lives alone in an abandoned cabin, works a terrible diner job and hides from everyone. The powers she has started to develop are terrifying her. When your first kiss almost kills the guy, it’s hard to trust anyone – even yourself. Then two people arrive in town who could change her life, and she finally gets a choice: follow a mysterious billionaire who says she’s scouting for gifted interns, or the handsome card shark with eerie red eyes. Except they’re not the only ones watching her… Rogue will have to trust in herself and accept the powers she’s trying to suppress to decide her own fate – before someone else does.