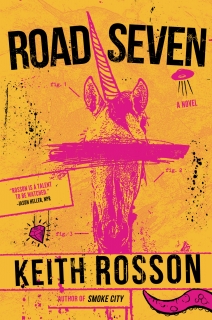 Mark Sandoval—resolutely arrogant, covered head to foot in precise geometric scarring, and still marginally famous after Hollywood made an Oscar-winner based off his memoir years before—has been strongly advised by his lawyer to leave the country following a drunken and potentially fatal hit and run.

When a woman sends Sandoval grainy footage of what appears to be a unicorn, he quickly hires an assistant and the two head off to the woman’s farm in Hvíldarland, a tiny, remote island off the coast of Iceland. When they arrive on the island and discover that both a military base and the surrounding álagablettur, the nearby woods, are teeming with strangeness and secrets, they begin to realize that a supposed unicorn sighting is the least of their worries.