Return of Our Country by David M. Burke 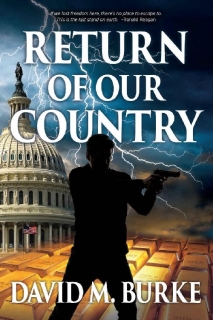 In Return of Our Country, award-winning author David M. Burke presents a heart pounding, thrilling adventure sequel that picks up 4 years after the electrifying presidential victory of George Carnegie in Burke’s debut novel, Return of the Founding Father’s Guardians. Now, President George Carnegie’s re-election hopes are in peril when the economy is attacked, the stock market plummets, and the country is on the verge of an economic takeover. With debt spiraling to new heights and hopes for resurrecting the American dream in peril, the President learns the secrets behind the group of people who have orchestrated this economic attack, and takes drastic measures.

He calls every Special Forces group around the world back to the United States to orchestrate a plan to save the country. With only weeks left until total collapse, the largest mission since D-day begins. If the mission is successful, the country could solve its massive financial problems and put the American people on a path of prosperity and abundance for the next century. Yet to succeed, Vice President Adam Youngeagle must put himself in a position more dangerous than any modern-day politician ever has.