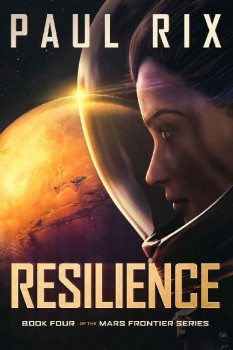 Death changes a person. Georgia Pyke should know.
Georgia has faced death too many times during her two years on Mars. Friends and trusted colleagues are nothing more than painful memories. It’s her own death that haunts her. Whatever the Sentinels did to save Georgia continues to alter her mind and body. She is desperate to know what she is turning into.
On Earth, the newly promoted Colonel Eugene Byrne insists an iron grip on the Mars program is the only way forward. With Georgia continually thwarting his efforts, he demands she returns to Earth, regarding her as a threat.

Arriving in Mars orbit, the Confederacy’s chief investigator, the enigmatic Jillnap, has his own plans for Georgia. He says he can give her the answers she craves. But what are his true motives?
Phobos, the largest moon orbiting Mars, takes center stage as Georgia navigates her way between the opposing desires of the colonel and Jillnap. As the truth unravels, Georgia is faced with an impossible choice; one that will impact all life in the solar system, and maybe beyond.