Reservation for Murder by June Wright 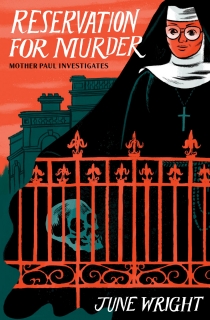 June Wright’s most memorable detective, Mother Paul, might seem a bit otherworldly, but little escapes the kindly nun – she has a shrewd grasp of all that goes on in the hostel for young women she runs in 1950s Melbourne. The atmosphere is already strained by a spate of anonymous letters, when Mary Allen finds a stranger stabbed to death in the garden. Then one of the girls drowns, an apparent suicide, and the tension reaches fever pitch. Is there a connection between the two deaths and the letters? The police investigate, but Mother Paul pursues her own enquiries.