Renegade by A. W. Wang 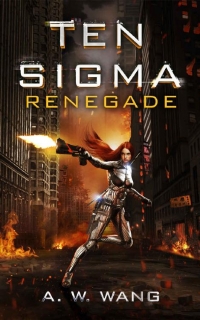 She awakens in a windowless room full of lab equipment and spends a minute getting used to the pumping heart, tingly skin, and air filling the lungs of her new healthy body.
Her name is Mary, and she has returned from the Ten Sigma Program, a virtual universe designed to produce the greatest fighters the Earth has ever seen through the harshest training methods ever devised.
Now stuffed with every type of lethal knowledge and a victor in countless life-and-death struggles, she has one goal: to reunite with her family.

But in the program, her memories were erased and now she only has an inkling of her former life.
And she has bigger problems.
Something is wrong with her download into the new body. While physically, she’s beyond human limits in terms of strength, quickness, and all the senses, she has wild headaches and is prone to passing out.
Worse, a nightmare from the virtual universe has accompanied her mind into the real world and is preventing her from regaining her past.

As she battles for survival, she realizes that the world she has returned to is far different from the one she left.
And with greater obstacles and foes than anyone or anything she faced in the Ten Sigma Program.