Reins of Power by John Forrester 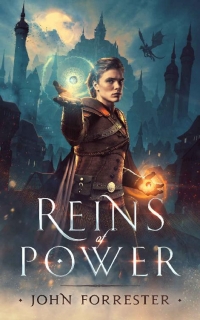 Akkar, a scholar at the Historians Guild, discovers his mentor has vanished under mysterious circumstances. He is tasked to lead the guild’s secretive group, hunting relics of power in the ruins under the palace while practicing magic away from prying eyes, and leading their workshop in the production of wands for the Wizards Guild.

But each day he is pressured to defend himself against growing suspicions connected to his mentor’s accused crimes. Trying to prove his innocence, he discovers evidence of corruption in the line of emperors, forcing him to make a choice between his dreams of rising from orphan to guild master and righting a three-hundred-year-old betrayal.

Not knowing whom to trust, Akkar turns to Jesnia, his old flame and famous actress, who has also been named a traitor. As an illusionist, she helps him find the truth and keep away from the authorities while tempting his heart away from his noble-born girlfriend. The nobility, the guilds, the church, and foreign enemies all vie for control of the Empire. What he discovers places him at odds with them all, and only secrets learned from an ancient immortal and a debt owed him by the dragons tips the scales. Only Akkar can seize the freed reins of power and, using forbidden magic, right the wrongs that ail the world.