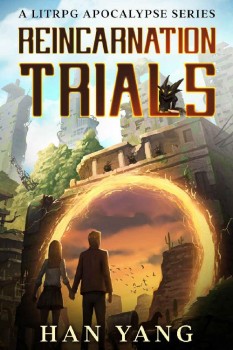 Defeat the monsters, become the champion, save the survivors.
A sliver of humanity abandons Earth, forced into the skies because genetically enhanced monsters rule the world. Four hundred years later, the Salvation Fleet returns, desperate to unload their overcrowded decks. Darcy – the AI mastermind who controls the fleet – uses simulated competitions called the Reincarnation Trials to determine who becomes a council member and who earns the right to join the first colony.

Theo achieves Citizen status after a decade of arduous training and is thrust into the Reincarnation Trials. Ready to help humanity survive, he enters the Snagglewood competition. The theme is a western, where he defends humanity against the monsters invading its shores. While he strives for first on the leaderboards, the real world calls for his help.
After being gone for so long, Earth transitions into a very dangerous place filled with narocks who call the overgrown jungles and forests home. Hidden among the terrors, pockets of humanity cower under the surface, most of them in urgent need of rescue.
Will Theo and the Salvation Fleet persevere or perish?