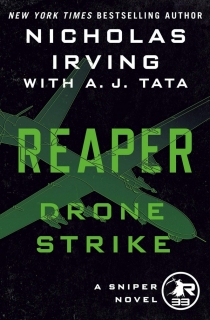 Nicholas Irving’s Reaper: Drone Strike is the next book in the explosive thriller series by the former special operations sniper and New York Times bestselling author of The Reaper.

On a classified mission to help the Israeli Defense Forces stop a Syrian and Hezbollah invasion to seize the Golan Heights, Ranger sniper Vick Harwood and his spotter go deep undercover. Operating with limited support from the American and Israeli governments, Vick is out on the edge.

Alessandra Cavezza, Director of Operations in Syria for the Italian UN Commission for Refugees, is moving families out of an embattled neighborhood. The nearly vacant suburb has been a haven for anti-Assad forces, ISIS militants, and Russian private military contractors. As she crawls into the basement of a home to help find a young girl’s doll, she finds a secret room that has detailed descriptions of unthinkable attacks on the United States, and falls into the hands of a madman: Jasar Tankian, Lebanese mastermind behind the plots.

As Syrian tanks attempt to push through Israeli defenses at the border, Team Reaper picks off Syrian tank commanders as they battle Israeli tanks, jets, and infantrymen. Combat intensifies as Vick goes black on ammunition. Commandeering a cargo drone to deliver Team Reaper to a landing zone near the coordinates, Vick becomes Alessandra’s—and America’s—only hope for survival.