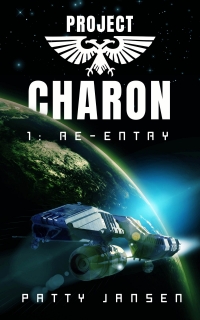 On the backwater world of Cayelle, Tina Freeman runs a shop with her son Rex: fifteen years old, half-human, half-android with a massive chip on his shoulder about having been born without arms or legs.
The shop makes a modest profit, but when a creditor turns up wanting his money back, everything goes pear-shaped.
She needs money, and needs it fast. Another creditor is impossible to find. That leaves her one option: to return to the world she fled fifteen years ago and Kelso Space Station, where her spaceship has languished for over fifteen years, and finally sell the thing.

Tina worked as scientific officer in the Federacy Force’s top secret Project Charon, and was forced out when she rang alarm bells about particles that escaped out of a rift to another universe.

As it turns out, the alien dust has been infecting people in her absence, causing profound changes in human behaviour.
When Tina re-surfaces at Kelso, her presence is a threat to those who still defend the project, including her ex-husband, and they want to shut her up, but her continued silence may well mean the end of civilisation.