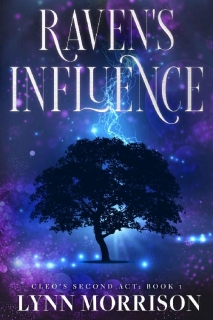 Ancient gods, magical powers, and a hunk living above our garage. Who says nothing ever happens in Raven?
Cleo Harwell swore she’d never move back to Raven, Georgia. Footloose and 43, she was looking forward to finding out what Atlanta could offer a single, empty nester.
Of course, that’s when her mama calls to say she needs a hip replacement. Despite Cleo’s vow to stay away, she does what any dutiful daughter would: she puts her business on hold, packs her suitcase, and heads back to the one-horse town where she grew up.

Raven isn’t exactly how Cleo remembers it, starting with the scorching-hot stranger living in the apartment above Mama’s garage. Yet, other things are exactly the same — including Mama’s best friend, who hasn’t aged a day in 30 years.
When a mysterious door appears in the middle of her mama’s hallway, Cleo suspects she’s losing her mind.
That’s when she finds out dementia doesn’t run in her family tree. Magical powers do.

The ancient Roman gods live in Raven, and the only thing standing between them and all hell breaking loose is Cleo… if she can lay claim to the Earth witch powers that are her legacy.
Some say Cleo’s too old to take on mythical gods and magical powers. She’s looking forward to proving them wrong.
She might be midlife, but sugar, she’s just getting started.